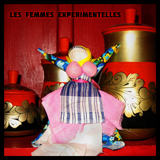 Homage to the International Women Day.

Opening with "Ouverture for that Day", Maile Colbert is an intermedia artist with a concentration on sound and video, relocated from Los Angeles and living and working between New York and Lisbon, Portugal. She spent the last two years collaborating with the art organization Binaural/Nodar, and is currently director of Cross the Pond, an organization based on arts and cultural exchange between the U.S. and Portugal. This beautiful piece she brings to our compilation is also the opening to "Come Kingdom Come", an experimental opera on millennialism and apocalyptic thought and theory, to be released Autumn 2011 on Two Acorns (US/JP).
Her web-site: www.mailecolbert.com

"Shadows" from Belgium, Dominica Eyckmans uses movement-sensors placed on her body, the information is translated through advanced software and thus she can alter the sound of the live-viola-playing and/or add sounds that are recorded live, originated by the viola and occur related to specific movements. This is a work in
progress she started about two years ago and has evolved very much since the sensors keep being updated, as does the software and of course her own dancing-skills. Dominica Eyckmans started playing the viola at the age of 17, after studies of piano and flute. Her main focus currently is contemporary and experimental music.

"Ya Abbas Catalakt" is a long, intense, progressive, ambience, noise piece from Hyaena Fierling Reich, Ana Cordeiro Reis, Lisboa Portugal. She develops a body of sound work since 1999 as a composer and experimentalist and works with experimental/improvised/noise music since 1996. Her work is based in experimentation and improvisation, involving the capture of real life sounds and ambients, as well as programming and editing (based on filmic canons) of sound sequences with uncanny sound sources - metal and wood objects, stones, musical instruments (prepared bass guitar, Hexluth -electrified luth, Moog synthetizer) or the exploration of sounds in spaces with specific acoustic characteristics - being afterwards edited and sequenced according to soundtrack-building techniques, breaking the borders of experimental music and sound in cinematic space.

"Pureza (Hilário Gonçalves)" is a poetic piece previously released on the album Dos Caminhos do Velho Mundo by the Net Label Just Not Normal.
Amber Dolly is a young artist from Braga, Portugal, with Risco Corrosivo she is Paranoid Doll and they are Z.O.T.E. a ambiental, noise, industrial sound project, together with Hyaena Reich they are Light Implant with one release on this Net Label: Lobotomized Peach

Anastasia Vronski brings the "Ghost", from Perm, in Russia, a purely electronic piece, progressing from her previous works, some acoustically recorded, many of them released on this same Net Label. She uses microphones, synths and instruments, sounds from the real life transformed by the emotions of life itself, most of her music is inspired by or dedicated to real events. She explores different approaches and techniques with a transversal, ritualistic, interest in human psychics. The exorcism of our deepest scars.
Anastasia Vronski kindly gave the picture used for the cover of this fertile release, nothing more suitable than a fertility doll from the ancient Ural tradition.

"Deixai Entrar A Morte" is a Florbela Espanca poem recited and accompanied, on electric guitar, by Sónia Amen. Recorded at first take. She is a visual artist, filmaker and musician from Porto, Portugal.
She is a member of FP25co. experimental project.

Susanne Hafenscher, MaCu is an Austrian based musician. She started her musically activities with studying piano and vocals. After a certain period without doing any music she began to play guitar. Soon MaCu started to experiment with prepared guitar and to generate music by using fieldrecordings and processed sounds of objects and vocals. "Disconnected" is the piece choosen by the curator of this Net Label for this compilation, it was previously released by the Net Label Isolationism Records: Vol.3.

Marita Lumi is a young plastic artist from Estonia, presently studying in Portugal, Porto, design school, she is also a musician with participation in interesting projects such as Estonian Bad Dream Big Band. One short song for an end, "Laul" was low-fi recorded at first take, an experimental and improvised composition.